The show was four minutes late, the house lights still on, and I was waiting outside the door marked with the section I’d secured seats. To my right, on the other side of the hall were five places to buy beer, wine, or something harder if the spirit took you. My bride and I had crossed the Louisianan border with two of our best friends, who share the same interest in music, politics, and nearly everything else. Good people who we enjoy. Bert u0026amp; Kayla. Neither has seen Kris Kristofferson before, and were possible more excited than I, though rarely do my emotions betray me.

Except mild frustration at the fact I was basically waiting alone, and it was now five minutes post show time. It seemed everyone was here: My wife’s cousin and her husband drove in from Austin, My friends had friends here, and everyone was buying drinks, and socializing, and it was time to gather our rear ends in our seats and await the start of the show. I had been taken aback, not an easy task for me, upon running into Andie Hellem, many Kristofferson fans may know either in real life or in the social media worlds of Facebook or pre social media, email list. She was working the “swag” counter where I was eyeballing a DVD.

Like magic my bride et al all showed back up, we made plans to meet up back here after the show with Haley u0026amp; Greg, my Brides cousins, and mine too for that matter now, and all the friends of friends of friends. We made our way to our seats, while people thinking they had plenty of time lingered in the lines. A familiar voice boomed through the mic while my back was to the stage, “Good evening Lake Charles”. The crowd erupted into applause. Even though I haven’t seen Kristofferson in a full concert in nearly twenty years, I knew he’d open with Shipwrecked In The 80’s.

Singing, holy Toledo I can’t see the light anymore
(Hank Williams said that)
All those horizons that I used to guide me are gone
(I’m damn sure Van Morrison said that …)
And the darkness is driving me farther away from the shore
(I said that)

He was strong, straight as a board; dressed in black with his trusty tan boots and Gibson guitar. His long (ish) silver hair tamed back resembling an old lions mane. He smiled and introduced the band.

I’ve never seen Kris with a full band. I didn’t become a real fan until the mid 1990s. It was his collaborations as a Highwayman that led me to his music specifically. Before that he was just an accomplished songsmith whose name I’d seen countless times on album credits.

I was somewhat familiar with The Strangers. I was always a fan of The Hag, and I think Ben Haggard should be the hottest thing in country music. (If country music existed in mainstream). Let me tell you, they are no slouches. To me, one of the greatest challenges a musician has is not getting in the way of a song. The Strangers accomplished this feat in grand style. A class act, They know how to treat a song, and a working songwriter like Kris.

Every few songs a band member would sing a Haggard song. I felt this was likewise classy. Kris remained on stage the entire time, singing and playing along, and appeared to be having a great time. They (all) nailed every song. The one imperfection was Kris’s on Sunday Morning Coming Down, where is repeated a line from the first verse, but quickly corrected himself catching up to the tempo of the song, and smiled with great humility. The audience supported him.

Sunday Morning Coming Down is a fan favorite. Do not get me wrong; I love it, but it like others that are so well-known, they are often predictable. Tonight Kris gave it a “cold opening”. No instrumentation, he just spoke into the microphone, “Well I woke up Sunday morning…” and he started playing and the band slowing came in on the end of the second line. It was almost like he slapped us across the face with the song. Not bad for man in his 80’s, and a song knocking on 50.

I’ve always felt Kristofferson’s songs were timeless. They broke barriers in the late 1960s and early 1970s, but they are always as fresh and strong every time I hear one. I’ve likewise often enjoyed many of his less popular songs and my only complaint is not many of them made an appearance. But not many writers or recording artist could fill a concert with nothing but number one hit songs.

One of the softer memories came with “For The Good Times”. It was so quiet. Everyone was at peace, and caught in the magic of the song. It was if we were all attending a vigil, and on the last chorus, most of us were singing along, in a soft yet glorious moment. You could hear every voice melting together into the words. 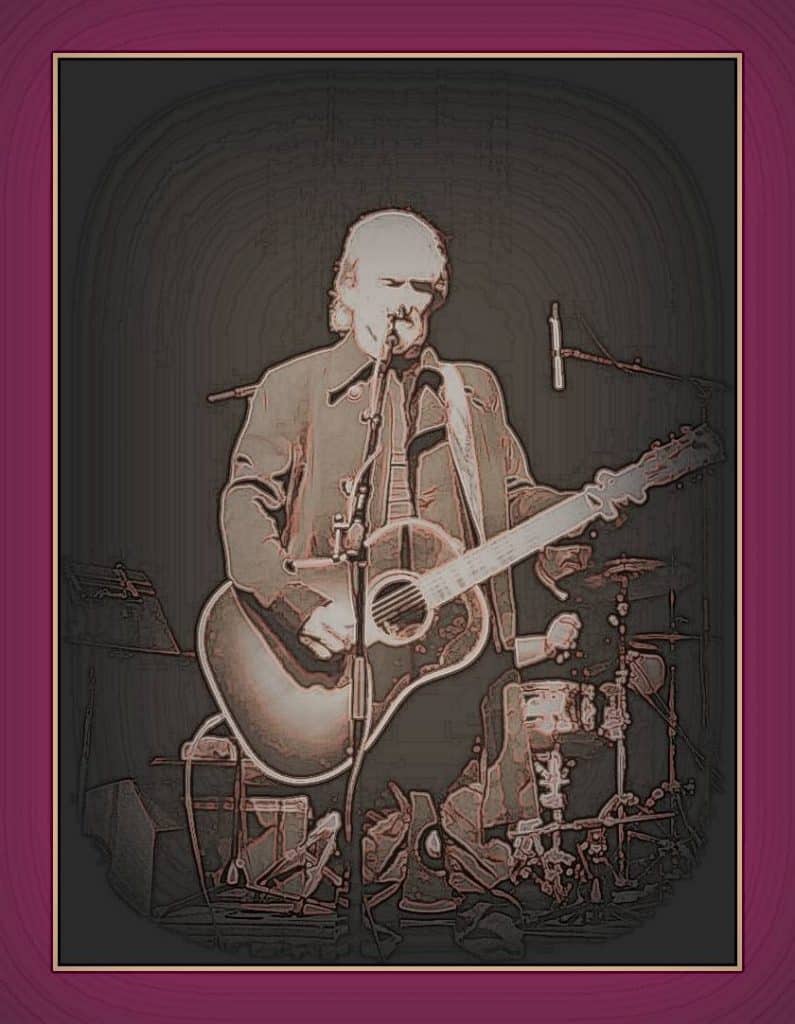 Afterward my Bride and my friends collected all the friends we knew and gathered energized bodies outside on a large porch overlooking the lake to visit about the show under the stars and in the crisp air. My cousin Greg is a Music Journalist in Austin, Texas. He is a gifted writer. He last saw Kris when he was suffering from Lyme disease, which we all thought was dementia at the time. Greg said it was sad to see him then, cause he couldn’t remember words to most of his songs. Greg stated how proud he was to see Kris in such fine form tonight.

We all enjoyed visiting about Kris and his music, and made our way to the bar (one of many this establishment offers), and rejoiced in our merriment until it was time return home.

I reflected further on the show once alone. I know this could be the last time I see Kris Kristofferson. He is not fading into the forgotten darkness where many artists find themselves in the twilight of their careers. Nor is he an embarrassment to dignity, being propped up on stage to only be a shadow of his former self. He is going out swinging, like the fighter he is, and always had been.

I will add these were great seats. Most were on the floor and all the same level. (It is a ball room). These were dead center on the risers, no one behind me and I was right in front of Kris –

Chad Hosel says .. “Great writing! I was there with my wife and the concert was great . Would definitely do it again.”