San Francisco 2002 – July 19, 2002. It was early in the day—late morning, I’d say—and a large crowd was gathering in the parking lot of the Gershwin Theatre, San Francisco State University. A diverse crowd. But every one of us had a common bond … a great love and respect for a singer/songwriter that many of us had been following since the ‘70s. Kris Kristofferson had then (and still has today) the charisma and character that drew people of all ages and backgrounds to him and his songs, and one to another, too. The air crackled with anticipation, and the excitement increased as the crowd grew. Some of us were already known to each other via our “Kris konnection”; others were strangers—but not for long. It happens that way at a Kris show. 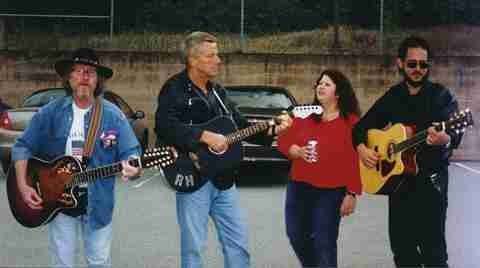 People came from all over the world to see and listen to the magic that was Kris. And I mean literally from “all over the world.” Katy came from England, Hank and Reimer from Germany, Jo from Canada, Nigel from South Africa! We’d traveled to San Fran from all over our own country, too … the ones I remember off the top of my head included Ginny and Paul from New Mexico, Mark from Indiana, Angel and Jim from New Jersey, Sue and Dan, and Wilma and Dan, Lucille, myself and others from New England. I am leaving off so many other fans, I know, and I apologize for that. I’m writing about this 2002 event in 2018, and now, at 68 years of age, my old gray matter ain’t what she used to be. I’d love to name everyone who was there, since it was such a special time. You know who you are … if you’re reading this, please jump in and add your own memories of it to this fan page. 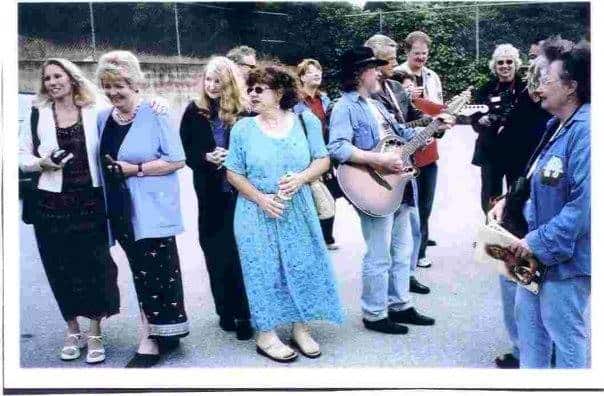 Kris Jr. pulled into the lot sometime in the early afternoon. I hadn’t seen him for a while, and so went up to say hello. As we walked toward the theatre, I told him how so many fans had traveled so many miles, just to see his Dad’s show. He was truly blown away. And when I got to “Nige, from South Africa,” he seemed incredulous. I believe he was even humbled by this show of devotion to his dad. Can’t recall his exact words, but I know they included “unbelievable.”

After Kris Jr. went inside, I realized I was getting hungry and figured other folks might be, too. I went around the lot, asking who wanted in on a pizza party. I looked up and found a local pizza joint and called in the order. When they asked for the delivery address, and I told him the parking lot at the Gershwin Theater, he thought my call was a prank one. But, I explained, and they delivered. Gotta love San Francisco! Mark (and maybe a couple of others) had brought coolers, so there we were, enjoying pizza and beer, and soda, in the parking lot of the Gershwin Theatre, waiting for our favorite performer.

Mark, Hank, Reimer, and Nigel broke out their guitars and we had ourselves a pre-Kris “Kris show.” Those who couldn’t play, like me, sang. Some small part of my memory recalls something about a neighboring house not being thrilled with all the loud voices coming from that lot. I think we may have seen a uniform, too. I think, but I’d never swear to it …

Many of us were able to have a few precious moments with Kris after the concert. Kris also signed Nigel’s guitar, and I believe he signed Mark’s, too. Every moment—from the time we descended on the theater, throughout the wonderful concert, to our post-show moments of forever with Kris—was magical.

We later learned that Lisa, his wife and manager, had been recording all Kris’ concerts, probably primarily for personal reasons. But when she listened to the playback of the San Fran show, Lisa recognized something different, something particularly special, about this show. And a new CD was born. Broken Freedom Song was released shortly after the concert (early 2003). Everyone at this concert was thrilled, I’m sure, to have been there and to think that, maybe, in some small way, we helped make that magic happen. A completely unforgettable experience, from start to finish.