Me and Bobby McGee: My first Kristofferson LP

Me and Bobby McGee was the first Kristofferson LP record I ever bought.  It was bought for my Dad because I knew little or nothing about country music, and it was 1) New and 2) Available for sale in boycotted South Africa.  There was something about the face on the record cover that was captivating, even if it did belong to what I then regarded as an old man. 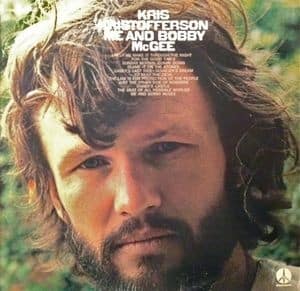 I now know that this record was a re-release of Kristofferson’s first album titled, Kristofferson, and that Wiki says it was re-released in 1971 using this LP cover because Janis Joplin’s recording of the title track was a commercial success.  It seemed like a good present for my Dad because I recognised song titles that he listened to.  Me and Bobby McGee sounded familiar, Help Me Make it Through the Night and For the Good Times were well-known, even Elvis recorded them.

Music, whether on record or tapes, was very important to South Africans growing up in this era.  We were isolated by international sanctions on one side and government censorship on the other.  We only got tv in the middle of the 1970s, and my family got their first television set around 1978.  Even then there really wasn’t very much to watch other than childrens’ programs and the state-censored news.

Teenagers and young adults spent their free time listening to music.  We would gather at a friend’s house, ideally somewhere that was free of adults, and crank the record player while discussing things that mattered.

Older people listened to the radio during the day, and either gave or attended house parties in their leisure time. Everyone drank, most smoked.  After the first few drinks, the records came out.  There was a lot to discuss and a lot to make sense of for young and old alike.

Boys (sons, brothers, boyfriends) were away doing their National Service, husbands and fathers were often away having been “called up” for camps.  The Angolan/Bush War was raging, and everybody was missing someone.  The guys were often angry or depressed when they came back, but it wasn’t discussed back then. When there was a shooting, a suicide or an outburst, we just shrugged and dismissed the incident with the phrase, “He must have gone bossies”.

We lit fires, poured drinks, and played records.  When we didn’t have records, we played cassette tapes (TDK being the favoured brand) of songs that we knew by heart, even if we couldn’t always identify the artist.

Every track on this album spoke to someone.

1.  Blame it on the Stones – Mother tells the ladies at the bridge club every day of the rising price of tranquilizers she must pay, and she wonders why the children never seem to stay at home – Blame it on the Rolling Stones. Line by Line Review and more info

2.  To Beat the Devil – Well, the old man was a stranger, but I’d heard his song before, back when failure had me locked out on the wrong side of the door – When no-one stood behind me but my shadow on the floor and lonesome was more than a state of mind.

3.  Me and Bobby McGee – Freedom’s just another word for nothing left to lose

4.  Best of All Possible Worlds – That policeman said Mr Cool if you’re ain’t drunk then you’re a fool I said if that’s against the law tell me why I never saw a man locked in that jail of yours who wasn’t just as low down poor as me.
Well that was when someone turned out the lights and I wound up in jail to spend the night

5.  Help me make it Through The Night –  I don’t care what’s right or wrong, I don’t try to understand
Let the devil take tomorrow, Lord, tonight I need a friend

7.  Casey’s Last Ride – Standing in the corner, Casey drinks his pint of bitter, never glancing in the mirror at the people passing by – Then he stumbles as he’s leaving and he wonders if the reason is the beer that’s in his belly or the tear that’s in his eye

9.  Darby’s Castle – Though they shared a common bed there was precious little said in the moments that were set aside for sleeping:

10. For the Good Times – And make believe you love me one more time ….  For the good times.

11. Duvalier’s Dream – Preferring perfect strangers to the company of friends because strangers are so easily forgotten

12. Sunday Morning Coming Down – I smoked my brain the night before on cigarettes and songs that I’d been picking….  It took me back to something I’d lost somehow, somewhere along the way.

8 thoughts on “Me and Bobby McGee”