Kirk Smith – His time on the Heaven’s Gate set

Kirk Smith met Kris Kristofferson in person by a fluke, of sorts. Kirk was cast to play a Russian emigrant in the controversial movie,  Heaven’s Gate.

The director’s passion for authenticity and attention to detail are part of Hollywood legend. This epic movie changed many lives and fortunes. Kirk’s’ preparation for the role included spending time in costume, make-up and being coached to speak convincing Russian.

Kirk shares some of his memories from the time.

The making of this movie left a strong impression on everyone involved in the making of it. Heaven’s Gate is the result of a passionate visionary creating his dream. It went massively over budget and was famous for causing financial chaos when released. Excitement and dedication are infectious. Being part of the set must have been an exciting and confusing time for a young actor. Kirk continues,

Chimino was furious. He took my arm, marched me back upstairs and chewed that artist out – Demanding to know why I had not been made up. The artist responded by telling him that he did not have to work on me because I was not in the union. Chimino got so angry that he almost foamed at the mouth. He yelled,” What in the hell do you care whether he’s in the union or not?  I’m paying you $75000 to do makeup – So do it or you’re fired!” He turned and stormed off.

According to the Telegraph It (Heaven’s Gate) probably counts as the most exorbitant art film ever made –  United Artists had taken a gamble on the picture almost wholly because of Cimino’s success with The Deer Hunter, which went on to net him the Best Picture and Director Oscars on only his second directing job……. He (Chimono)  was, ever so briefly, the golden boy.

That makeup artist went to work. When he was done, I had been made to look like a black person. Once wardrobe were done with my costume, I looked just like Chicken George in Roots!

I got out onto the set and joined the 1000 or so other people. Chimono spotted me. His fury reignited as he called “CUT!” and pointed directly at me. Time stopped. It went dead quiet. I thought I must have done something wrong, but couldn’t think what. I felt 3 inches tall. It was my make up that caused all the bother.

Chimino sent Bob over to redo my make up – Right there on the set, while everyone watched and waited. Bob told me that he’d be doing my make up from then on. 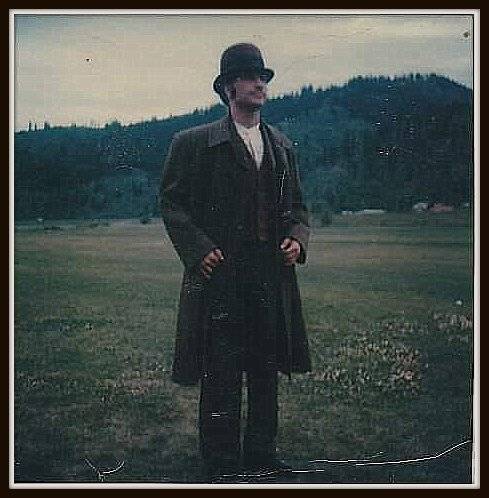 After Work with Kris Kristofferson and Bob

One day, we got chatting while he worked. Bob asked, “You’re from around here?” He said that he wanted to go party and asked if I could show him around. We arranged to meet later at the Holiday Inn.

I arrived around 8 pm and sat next to Bob who was already at the bar. We got talking about different places we could go. Spoilt for choice – there was a lot going on.

All of a sudden,  Kris Kristofferson just walked up and sat right next to me. He asked if we would mind if he joined us –   to party.

We readily agreed and told him we were going to Spokane to a place called Gatsbies – a rock n roll bar. Kris asked if I would drive since I knew how to get there. He offered us Chiminos’ Bronco that he had just ……Well,  stolen!

That Bronco really came in handy – My Triumph Spitfire was only a two-seater. We headed off to Gatsbies. Bob and Kris sat in the back drinking Jack Daniels and snorting coke while I drove.  Kris was telling everyone he was in rehab at this time. (Hope it doesn’t get him into trouble .but he’s too old to spank lol)

Thankfully, we all managed to survive the era. Addiction was part of my life too back then – I just celebrated 30 yrs clean n sober. 9-15-88

More personal stories or check out our Fan Mail

kriskristoffersonfan.com is a participant in the Amazon Services LLC Associates Program, an affiliate advertising program designed to provide a means for sites to earn advertising fees by advertising and linking to amazon.com. We may earn a small commission for my endorsement, recommendation, testimonial, and/or link to any products or services from this website.