If you haven’t seen the trailer for The Winding Stream : The Carters, the Cashes and the Course of Country Music – You might want to check it out.

Even if Kris Kristofferson wasn’t in Winding Stream,  I would still be very excited to see it.  The news gave me goose bumps just reading about it.  You haven’t seen the trailer yet?  Let’s fix that now.

Used with permission from the filmmaker, Beth Harrington.

The Carter family has brought music to their fans for more than ninety years, long before the media as we know it even existed.  Many artists have named this group as their inspiration, if there is an artist or group that wasn’t influenced by their work in some way, there is no denying the impact they have had on the country music industry overall.  It is possible that without Americana Country and Folk music going mainstream, the music revolution of the 60’s might not have happened at all.  It would surely have been less dramatic without the structure and distribution pathways that were carved out because of public demand for access to good music.

This movie from Argot Pictures is currently doing its rounds on the festival lineup.  We should hopefully get the opportunity to see this documentary later this year. (Update: Now available, see the bottom of the post)

According to the preview, filmmaker Beth Harrington has put together a comprehensive story of the Carter family, following them from the beginnings in the mid 1920’s, right through the ups and downs, highs, lows and the madness that was and is the Country music scene.  From old folk song standards,  to playing and recording their own work, the family have been at the heart of Country music since before it even became a genre.

Carter /Cash – The music lives on

Although the founding members are no longer with us, the name lives on.  The Carter and Cash families are still strumming and singing and promoting country music.

These ideals are met by hosting booze free, family centred acoustic  music nights in keeping with the old traditions.   A browse through the on site museum would surely be fascinating day out, especially when followed by a tasty, traditional meal.

Here is a video clip of Rita Forrester talking about the Carter Family Fold.

CC Licence
All that said, it always comes down to the music.  We know that Kris Kristofferson is sharing the stage with John Prine in LA soon.  With that in mind, the music lineup in this movie will get me off the sofa, and into the cinema as soon as it crosses the pond, and lands in the UK.

The tracklist of the Winding Stream  includes –

John and June’s son, John Carter Cash,  provided family photographs for the film.  Studio recordings by George Jones and Sheryl Crow add to the friends and family vibe I get from the preamble,  and hearing that some of the final Johnny Cash film footage ever is included makes me want to pack my bag and crash the next festival that features this film.  From what I have seen this looks to be a friendly, intimate narrative with lashings of big personalities and dollops of humility.

I won’t rush off with my backpack, but I will wait in inpatient anticipation for the film to come to me.  Real roots music, bring it now. 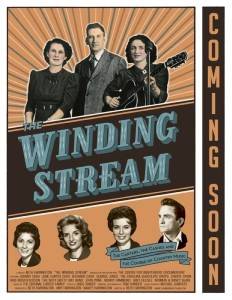 Please link to my page if you share.  That aside, don’t steal content, ask.  If you would like to support this project via Kickstarter, you can find out more HERE  Be part of history.

Update: The movie and CD are available from Here