Kris Kristofferson South Africa  – I finally happened in 2014. He says he really enjoyed it. Many fans hope he’ll be back. It’s a long trek, but never say never.

Kris was 77 that year. It was a tough period for him health wise. He did speak of his (pre lyme diagnosis) memory struggles in candid interviews, but his performance on stage exceeded expectations. I wonder if Kris ever realised how many dedicated fans he has in ZA?

William Welfare commented on Kris’ work ethic is an article from the time.  Kris followed two full sets in the packed out GrandWest Arena covering five decades of songwriting with an encore of FOUR songs.

The concert was solo. Kelly joined her Dad on stage for some songs during the second set.

Kris Kristofferson has been part of South African culture for many years. It is unlikely that he knew anything about this at the time.

This article by Kin Bentley adds insight into how many South Africans came to know and enjoy Kris Kristofferson’s music. I intended writing about this phenomenon until I came across this work by Kin Bentley and realised that everything I wanted to say had already been said – A lot better than I could have said it. 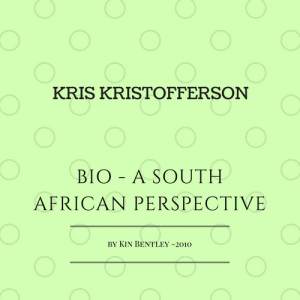